Since the discovery of the giant dinosaur fossils, the world has been curious to watch them live and know more about them. From writers to artists, designers to manufacturers, directors to actors, every creed of humans has pondered over these beings and tried to paint the picture of their vague existence with the vivid color of their imaginations. The fossil discovery stirred a very limited number of audiences, but the literary work related to prehistoric times and creatures grabbed the attention of innumerable people. Later, when contemporary life and prehistoric creatures were made to meet through the window of writers’ imaginations, it made history. Furthermore, the extraordinary literary pieces free from shackles of impossibility attracted the attention of filmmakers, and finally, masterpieces were produced. The most famous of them being the Jurassic Park franchise which delivered three blockbusters over about twenty years. The first movie from the franchise left an everlasting impression in the minds and hearts of the audience.

People have been obsessed with the idea of bringing dinosaurs back to life, witnessing these sturdy creatures. Jurassic Park fandoms have been writing imaginative stories about the ferocious dinosaurs, their rebirth, and their friendship with humans ever since Jurassic Park was released. The popularity of Dinosaurs has been increasing for the last three decades and there is a large number of dinosaur enthusiasts throughout the world. The Jurassic fans and dinosaur lovers are keen on collecting dinosaur inspired items and like to get their hands on all of the collectibles. Although the internet is flooded with dinosaur-themed products, the variety is so vast that one might end up being perplexed about what to buy and whatnot. Dinosaur inspired crockery, jewelry, lamps, LED Lights, murals, and many more items are easily available at the market. But have you ever thought about buying something bigger? Something enthralling and majestic? If yes, you’ve come to the right place! This article introduces you to the two most amazing and exciting dinosaur themed products that will cater to your craze and obsession. Not only the two products i.e., realistic dinosaur costumes and dinosaur puppets, are introduced, but their types and specifications are also discussed so that you know what exactly you need! 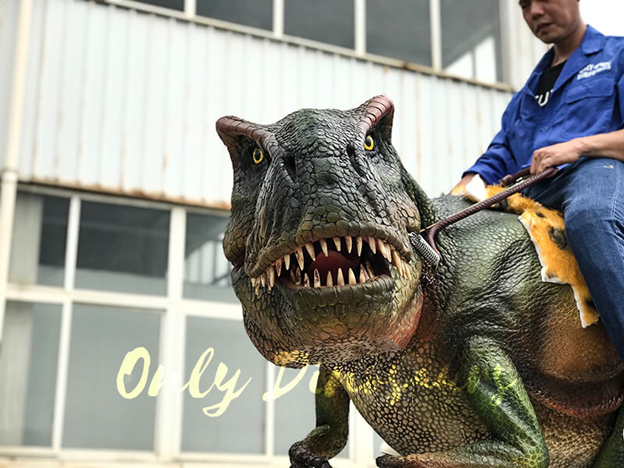 The shape and architecture of the dinosaur leg are very different from those of a human. The dinosaur is tried to be fabricated in such a way that every small detail of the dinosaur body is duplicated on the realistic dinosaur costume so that it can be deceivingly perfect. So, the difference between the human leg and dinosaur leg pose a hiatus in the way of making the costume realistic. This problem is resolved by making the costume as such that the legs of the operator are visible although the legs of the operator can be seen while performing but one forgets looking at the legs when a realistic dinosaur is standing nearby. A variety of visible leg dinosaurs like the T Rex dinosaur costume, Blue Raptor Costume, Black raptor costumes are available at stores like Only Dinosaurs.

The outlook of these costumes is very realistic, but their legs are designed in such a way that they accommodate the performer’s legs. These costumes cover the operator’s whole body, and he can see outside with the help of a monitor that shows the outside view with a camera fixed at a nose. The stores like Only Dinosaurs have a variety of such realistic dinosaur costumes.

These costumes are around 15 feet long and 8 feet tall. These are very flexible and riding on them takes one even higher than the audience. It feels like you’re riding a real dinosaur.

The dinosaur puppets are a perfect pick for you especially if you like puppetry or you are gifting it to your child. if your child is a dinosaur enthusiast then there can be no better birthday gift for him. Moreover, puppets have been proved to be very constructive in a child’s character building, stimulating memory, and developing oratory skills. Adorable dinosaur puppets are available at manufacturers like Only Dinosaurs which can blink their eyes and show movements of neck and shoulders. These are facile to use and lightweight which makes them perfect for kids.

Following are the types of Dinosaur Puppets:

These are adorable puppets that are controlled with the hand. The hand controls the eye blinking and the movement of the head and mouth. These are so realistic and give pet vibes.

These puppets have a fake arm owing to which it looks as if the actor is holding the puppet. This gives a more realistic look to the dinosaur puppet.

These are the puppets that have a shell and a dinosaur. The shell and the dinosaur together look like a newborn baby dinosaur. These are cute and heart-melting, and perfect for your kid if he loves newborns.

If your kid is empathetic and wishes to raise a dinosaur baby, this type is the best option. It comes as a baby dinosaur in a crate. The performer controls the puppet using one hand and holds the crate with the other one.

This looks like a realistic dinosaur on one’s shoulder. It is more suitable for young teenagers who can handle it well. controlling its head, eye, and mouth moments is a little complex.